Dalia Hochman is the director of K-12 model development and adoption at Next Generation Learning Challenges (NGLC).

Meet Josh, a seventh grader at Intrinsic Schools in Chicago, an NGLC grantee in its second year of operation. By late December 2014, Josh’s teacher realized that he, along with eight or nine of his classmates, had already mastered the seventh grade math curriculum. What to do?

In a traditional school, students like Josh might languish, tutoring other kids, getting bored and, perhaps even becoming disengaged without any academic challenge. But Josh’s teacher, Mr. Fox, decided to take a risk and try something new. He took the group of students ready for Algebra I aside and helped to structure a small team using an online algebra curriculum via Flipped Math.

When the Education Innovation Fellows and I arrived to the school this past Monday, the group was working at a steady pace, individually or in pairs, taking assessments when they had finished mastering a concept. Mr. Fox set up norms for the group so that they could help one another in case they had a question, because he isn’t readily available (he has to focus on the remainder of the class still working to master the seventh grade curriculum). The primary interaction these students have with Mr. Fox is forty-five minutes every week—for added instruction, checks for understanding, and help in improving the organization and team structures of the group.

We were puzzled by what we saw. How could seventh graders, excited by the warm weather, baseball, and socializing of springtime, be self-motivated and self-disciplined enough to work together as a team, and teach themselves Algebra? Watch them explain themselves in their own words in this video.

Intrinsic Schools was selected as a Next Generation Learning Challenges (NGLC) grantee in 2012, and we’ve watched the school evolve through its design and launch phase. This week, we were able to come back to Intrinsic and visit the magnificent new facility built from an old lumberyard on Chicago’s historic North Westside. There have been nice descriptions of Intrinsic’s academic model published recently, so we won’t repeat everything here. Instead, we’ll share a few highlights that are of particular interest to our NGLC community:

The Intrinsic Story
When you visit schools as much as we do, you come to realize that most innovative schools are based on a founding creation story. Principal, CEO, and founder Melissa Zaikos’ inspiration for Intrinsic is rooted in her many years working with Chicago Public Schools and watching how technology was used (or not used) in varying schools. She observed that in the early years of blended learning, when teachers fully integrated online adaptive curriculum into their lessons as one tool to help personalize and differentiate instruction, not only did the data show improved performance, but students were more engaged in their learning. In the schools where online curriculum was an add-on or a separate project, student achievement was not impacted, and the software and hardware often collected dust.

What makes Zaikos’ story so interesting is that she was able to see a trend and watch patterns across dozens of schools she managed at the district level, and then hone in and build just one specific school model, moving from a macro to a micro level. She also brings her experiences as manager of large teams (within the education industry) to the management of the school. 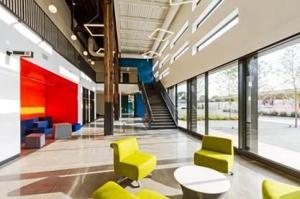 Two Changes Between Year I and Year II: Space & Culture
Intrinsic experienced two drastic changes between Year I and Year II—one coincidental and one intentional. The first change was that the school was able to move from temporary office space in downtown Chicago to a beautiful new-construction building that was carefully designed to meet the needs of the academic model. (See Edweek’s recent article describing Intrinsic’s space.) Every meeting space, seminar room, lamp color, and rug design is laid out in support of the academic model. For a few full overview and virtual tour of the space, check out this video.

The second change in Year II was an intentional focus on culture. Intrinsic leaders say that they spent 80% of their summer PD time between Year I and Year II on culture building, creating policies and norms around how the school would operate. Teachers and leaders developed protocols for everything including transition times, group work, shutting down computers, working independently on the “coastline”—the term Intrinsic uses to describe the perimeter of the rooms where students work independently.

When asked which factor contributed more to the change in Year II, space or culture, Zaikos emphatically stated that the change in culture has made more of a difference than the gorgeous facility. Zaikos also noted a key challenge being addressed now in advance of Year III is figuring out how the culture needs to evolve so that students become more independent leaders as they enter grades 11–12 and prepare for post-secondary experiences.

Customer Service
Intrinsic’s administrative and back-office staff considers itself to be a customer service team. As a 1:1 school, the teachers and students are connected inside the classroom via Chromebooks, creating a more seamless environment to differentiate and personalize, both in advance of class and on the fly. Teachers are also connected via old-fashioned (but artfully designed) classroom phones to the administration (from front office managers to deans and principals to the network-level “School Support Team”), via Google chat for classroom-level issues requiring immediate attention, and via Zendesk, an online support system, knowledge base, and ticketing system, for more substantial issues. They hold weekly professional development sessions on Wednesday afternoons (early release day), where the full staff connects to review progress, problem-solve, consider new approaches, and plan for upcoming events. Visitors watch as teachers and students are the center of the school environment and the administrative/back-office team comes in and out of the classroom when they call, a human call center that flips the traditional power dynamic in a school. “Customer service makes teachers’ lives easier; it makes big lifts lighter because we’re all working together, smarter, to lift them,” said Marcos Alcozer, Director of Technology.

Sharing Intrinsic
As a testament to their belief in collaboration and sharing their learning, Intrinsic has begun to disseminate their ideas through a Collaborative. Next week, the school will present its lessons-learned to 50+ teachers from charter, public, and private schools across Chicago and the country. The forthcoming “Sharing Intrinsic” website is still in the works (we’ll let you know when it goes live), but for now, you can check out their knowledge dissemination beta site here.

Visit NGLC’s OpporCommunity to learn more about special opportunities curated just for you, including: